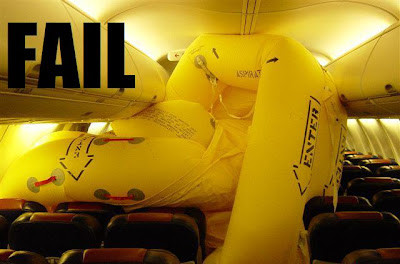 Now that Savannah (xoxxoox) has got over her irrational fear of flying. Yikes! And why not? (our picture today shows the massive airbags now fitted to modern aircraft) I suppose it’s time to think of holidays.
Because of the credit crunch, we shall not be taking the villa in Umbria this year but rather a caravan in Port Seton. You can have just as much fun and the carbon footprint is negligible.
Posted by Dr Maroon at 8:00 pm No comments:

Picture courtesy of the wonderful http://www.failblog.org

I’ve heard some weird noises during flights on MD80s, 737 200s and the odd Fokker, all of which I am assured are “normal”. I’ve never witnessed blue ice, trailing smoke or flames, unexpected engine shutdowns, flap failures, or covers coming off in flight like our picture shows.

However I was on a Loganair flight from Glasgow once.

We had been pushed back and had taxied for about 50 yards when on go the brakes quite hard. Ah, this is first officer Sandy McNab or whatever his name was, we’ve got a slight technical problem that will delay us for a few minutes, we won’t need to return to the terminal etc etc. Almost immediately a Loganair van pulls up and another man pushing one of those sets of steps on wheels, you see them in B&Q, arrives and climbs up onto the wing. We’re all watching him. The guy in the van is handing him up tools. Off come some engine covers, and then more bits from inside the engine then he starts laying into something with a hammer!
Now, being in the trade as it were, I was unconcerned at the bits he took off. I was watching him, engine covers, some heat shields, but when he started in with the hammer, I couldn’t think what he might be hitting or why.
I looked at my fellow passengers but being British they were studiously ignoring everything by now even though you could feel the hammer blows through your seat. He suddenly stopped and put everything back and ran round to the pilot’s window and gave him the thumbs up. A second later though, he waved both his hands in the unofficial non JAR approved hand signal for “for fuck’s sake stop!”. He ran to the wing, and pulled away the steps, ran back and gave the pilot the DOUBLE thumbs up this time, so that was alright.
I felt like captain Kirk in that programme where the hairy beasts are crawling about the plane pulling bits off and he’s the only one to see them.

Think on that, on your way to Malaga this summer. 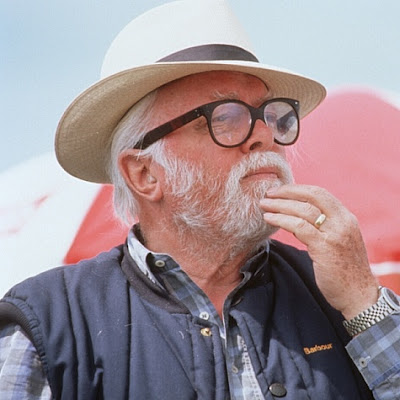 Persephone: Gosh darn it, I wish that plumber would arrive.

Yes, can I just stop you there luv?...Karl sweetie, I’m not getting any sorrow from you old darling…remember your ex-girlfriend’s just been devoured by piranhas, so a bit more…Ronnie sweetheart be a treasure and put a filter over that light, there’s a good boy, her thong’s strobing like I shouldn’t wonder…Makeup!...can you do something with Miss Melons’ face dearie?...we’re getting a massive flare off her forehead this side of the lens and it’s ruining the…thanks luvvie,…just do her boobs while you’re at it…right everyone!...from “Gosh darn it” Persephone…lots of anxiety this time darling…and… 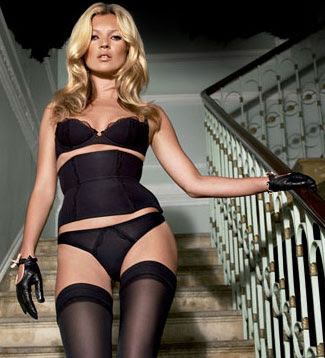 We're sorry for the slight delay to Cape To Rio, this is due entirely to Kim Ayres and Gorilla Bananas, normal service will be resumed forthwith.

Until then here's a short programme about clay and so on. 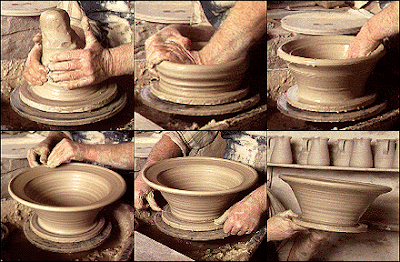 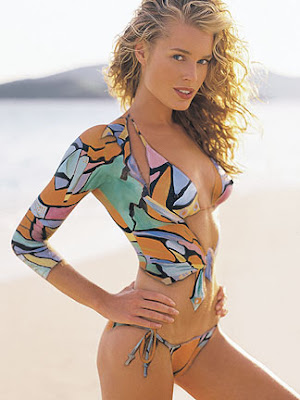 You may be interested to know that I have a sore thumb. It’s buggered up my piano playing something chronic but the point is it looks exactly as it always has, a fine thumb, a noble thumb, a thumb Michelangelo would have been proud of, and the mirror image of it’s neighbour on my other hand. Totally inconspicuous in fact. It ‘s been sore since the Friday night bar-B-Q when I was passed a baked potato in tin foil which was a bit hot, so I wrapped a napkin round it to make it more comfortable to hold.


That's the ol' ball and chain if you're wondering. It was a hot day.
Posted by Dr Maroon at 7:31 am No comments:

Goodness gracious me but the Irish politicians are an awful handless lot.
Had they really wanted to win the vote, they should have paid more attention to the wording they were to put on the ballot slip. Muddy the waters a bit. For Example;

Question: Do you want to keep the same constitution?

Vote YES for the constitution.

Vote NO to change.

Then ipso facto they could have argued they'd won no matter what !
Posted by Dr Maroon at 6:59 pm No comments:

I was following a Walkers shortbread lorry up the motorway tonight and I had some pretty weird thoughts about it. They just came into my head from nowhere. You know that one where Homer Simpson finds a crashed sugar truck and steals all the sugar? I couldn’t get the idea out my mind of how great it would be if the shortbread lorry overturned and everyone on the motorway went mad and dived into the pile of shortbread. It could have been a total shortbread-arama! Everyone would gorge themselves sick on shortbread in pagan nakedness then revert to Norman Normal when the police showed up to spoil the fun and take our particulars.
Either that part of the motorway (M90) runs over some strong ley lines or I am suffering cravings because of my pregnancy. I’m going with the ley line theory; I can’t be pregnant, (no one will sleep with me).
Posted by Dr Maroon at 7:43 pm No comments:

Man: Deep breath, I’ve had a glass of cider and a weak doobie (on a school night!) and I’ve decided to

Woman: What are you doing?

Woman: Oh Jesus, here we go – you you you ! Nobody wants to hear your self obsessed drivel, wise up ferchrisssakes!

Man: Just background material, my friends may want to know what I’ve

Man: to you perhaps. To me however, they are as valuable, perhaps more so, than my associates in the corporeal world

Man: Look give me some peace. I don’t bother you when you’re doing the laundry

Woman: we agreed you would not bring the internet back into this house

Man: we had a set-to, hardly an agreement, besides “this house” as you put it needs to be connected

Woman: you said he was odd

Woman: You said he looked at you funny

Man: He did as well. He definitely doesn’t believe I’m a doctor

Woman: I don’t believe you’re a fucking doctor any more either

Man: Right, anyway, thanks for the pep talk darling, I’ll mention you to all my friends around the world