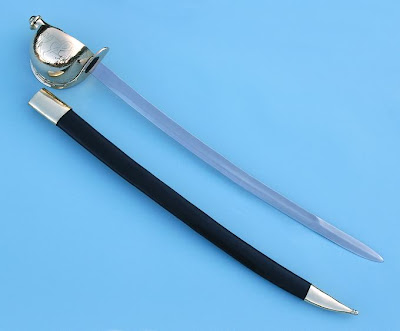 They don’t like it up ‘em.
In the China Sea in the eighties when the navy were still boarding ships to have a nose around, it didn’t matter how many guns they carried, the crew of the vessel being searched were always a bit uncooperative, even to the point of rudeness. The boarding parties discovered however, that if they took along some naval pattern cutlasses to wave about, it changed things. Suddenly it was all:

“Yes sir, no sir and this way to the cigarettes and heroin sir.”

Well they pensioned off the naval cutlass just before the 1990 Gulf War because it didn’t fit in with smart bombs and cruise missiles, but imagine if those sailors [under American command] had had them when the Iranians turned up in their rubber dinghies.
For a kick off, your Arab respects a man with a sword. They know you can give any mug an AK47, but it takes cojones to handle a blade. Second, they could have slashed and sunk the Arabs’ boats making them look pretty foolish and Arabs hate to be mocked. Third: if things still looked a bit prickly, then swish, they could have taken an ear or a hand and that always concentrates the mind of the native. They don’t like it.

As it turned out, all their body armour and i-pods and machine guns were useless.
The Iranians simply said, “ Effendis, would you mind awfully coming with us?”
and the senior service replied, “ Why certainly, Abdul.”
Tony Blair says if they don’t hand them back then he’ll let down their tyres and steal their bicycle pumps. Give us back our sailors you rotters !
Posted by Dr Maroon at 12:07 am