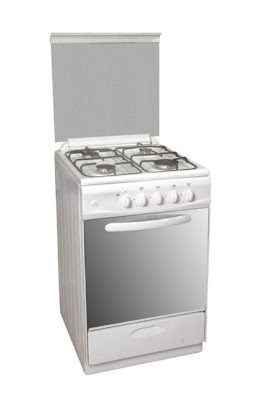 You may be interested to know that we have a trophy stove. In the same way that Mrs Maroon is a trophy wife even though we’re not married, our stove is a status symbol even though we can’t cook. Just before he put the house on the market, the previous owner installed it. Oh clever clever man. The cynical bastard never thought to fix the medieval wiring or upstairs plumbing. Sod that for a lark.
It’s not like other stoves. For a kick off, it’s English and has its own enamelled inspection man. He comes in a very smart van and wears a tie. You only get what you pay for. Jealous visitors to the kitching studiously avoid looking at it, except those who also have a trophy stove who therefore must remark on it, to show, well you know what I mean. Catholics, Etonians and Oxbridge graduates have a way of telling you within 30 minutes. Same with trophy stoves. It’s called the half hour rule.
To confirm stove ownership, the opening gambit is usually a recipe for something complicated. This never works with us because we never know what she (it’ll be the woman) is talking about. So the man, to save any conjugal abuse in the car on their way home, will come to her aid by getting technical about servicing the inlet manifold regularly. This doesn’t wash with me because I am technical. In fact I have a degree in technical from Cambridge for which I said many rosaries (Let Eton Flourish).
So it’s due an inspection for the good housekeeping seal of approval or something which means I spent last night, FRIDAY night, cleaning it with non abrasive cleaning solutions. Since we are irretrievably working class, we couldn’t have the chimney sweep going next door afterwards saying what clatty middens we were.
“That Mrs Maroon ‘ad ‘arf a pork chop stuck down ‘er diverter plate. Disgrace it was.”
Good lord no. So when he has his tea, Mrs Maroon will scorch some Marks and Sparks all butter shortbread with a blowlamp to pass it off as her own, and I shall know he has done FA because I’ve done it already, using the handy toolkit and spout brushes provided. The kitchen is now a total coup but the stove is ready. We shall eat pot noodles to keep it clean until he’s gone.
Posted by Dr Maroon at 1:39 pm