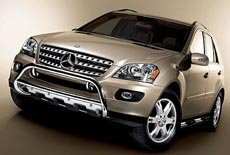 There is something despicable about SUVs. It’s the mentality. It’s a symptom of defence, protection, withdrawal. There is an inherent simplistic immaturity about those who drive them. A dullness, a predictability, a poverty of ambition, a lack of imagination, a sheepish willingness to believe the marketers that a jeep will solve their deep rooted psychological problems of inadequacy, that’s what it is.

It’s not only that; they are a hopelessly over engineered solution to the problem of personal transport.

It used to be Mercs didn‘t it?
Although to be fair, there was always something a little disreputable about a Merc. It was an English class thing. Mercs were new money.
They still really annoyed me.
They were so heavy, they needed a lorry engine to haul their Germanic carcasses round the streets, just so their dullard drivers could look out on the non Merc world.
Not now. The Mercedes is a tinny piece of chav junk now.
Common as muck.
The three pointed star is like Burberry. Naff.

All my friends (four) drive totally nondescript old hatchbacks and saloons. The fact we choose to spend all our money on drink is neither here nor there.

My other friend Richard, the finance director, has a Mercedes SUV.
You couldn’t make it up.
His wife, an utter gem, hates it, because it’s agricultural and too high up and awkward to park in the crappy spaces you get in carparks these days. She really did take a wrong turn when she married that oaf.

Here is a quote from the page that I got that picture from:

“The only drawback I found to the interior is the presence of a confusing new shift lever on the steering column, which places the gear stops at points that most drivers will find unfamiliar. I found myself engaged in Reverse when I really thought I was in Park. Park is engaged by pressing in a button on the lever.”

God bless us and save us all.

I wonder how many of you read the postscript above in that nasal "white man" voice so beloved of Eddie Murphy.