Radio Scotland traffic update: a loose tarpaulin on the southbound Forth road bridge which has been causing major delays has now been removed…

Bert Scoggins pressed his heavy boot further into the wooden floor eking every horsepower from his grumbling Bedford. If he could just make the border and the A6 before nightfall. Four tons of tractor parts lashed on the back of his three tonner. Rush job. If the rozzers stopped him now… He peered through the split screen at the bridge up ahead, hypnotised by the wipers and the protesting whine of the crash box straining in third and the thought of Elsie and her tea urn waiting for him in the caff at Shap. 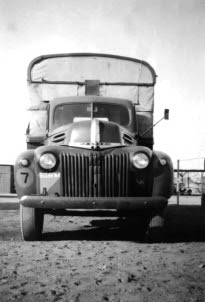 He’d parked overnight in a bombsite just off the Fife ring road and as he slept, a gang of motorcycle thugs employed by a rival haulier had undone all his half hitches, retied his ropes in running sheepshanks and let 2 lb of air out one of his rear wheels into the bargain.
“That’ll sort you out Granddad.” sneered Spike, the gang’s leader, “Right, let’s scarper, we’ll meet at the milkbar on the B672 just before the bypass and then we can do a ton-up down that long straight that runs outside the children’s T.B. and polio hospital.”
“That’ll wake ‘em up!” agreed Snot, revving his BSA Goldstar threateningly.

Now in the grey morning, as his grey lorry stubbornly shoved its way through the grey Scottish weather, Bert, the tough cockney ex-soldier in his ex-army lorry took a woodbine from his flying jacket and smoked it. “Blimey,” he thought, “wind’s getting up.” He never heard the tarpaulin slip its bindings, to be blown off and land catastrophically on the southbound A90 behind him, blocking a major thoroughfare and arterial route vital to the economic wellbeing of the nation. 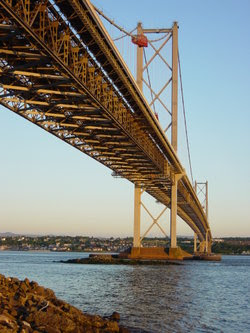 Commuters on the bridge, panicked by the sight of 10 square yards of green canvas lying silent on the asphalt, have stopped to await emergency instructions. Luckily a dashing engineer, on his way to an important meeting takes command. To the astonishment of onlookers, he ignores the risk of getting oil on his tie and drags the tarpaulin to the side, rolls it up a bit and dumps it over the railing onto the footpath where it will no doubt wrap itself around some poor pedestrian or cyclist and suffocate them to death. As the traffic starts moving again, the dashing engineer is alarmed to see in his mirror, that the tarpaulin comes to life again, rearing up in the wind, shaking its ropes in fury at him, but the wind, ever a fickle mistress, pulls the monster over the side to a watery grave, far, far below.
“Phew!” he thinks. “That’s that.”

250 feet below, the supertanker BP Hapag Lloyd III is making its way down the Forth from Grangemouth with 200 000 tonnes of high octane aviation gasoline for light aircraft and 150 000 tonnes of ethylene gas. The Forth River Pilot has control and is pointing out the normal hazards to the vessel’s master…

Hi! My name is Project 71. Weird name I know, but my masters are weird too. My masters also say that I'm a really interesting website. So why don't you consider reading what I am. Masters say it won't take you more than 22s to read. :) http://www.project71.com/readme Enjoyy!